Following up everyone in treatment comparisons

After taking the trouble to assemble comparison groups to ensure that like will be compared with like, it is important to avoid introducing the bias that would result if the progress of some patients were to be ignored.

As far as possible, all the patients allocated to the comparison groups should be followed up and included in the main analysis of the results of the group to which they were allocated, irrespective of which treatment (if any) they actually received. This is called an ‘intention-to-treat’ analysis. If this is not done, like will no longer be compared with like. 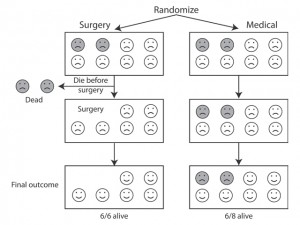 Why all patients randomized should be included in the final outcome (‘intention to treat’) (click to enlarge).

At first sight it may seem illogical to compare groups in which some patients have not received the treatments to which they were assigned, but ignoring this principle can make the tests unfair and the results misleading.

For example, patients who have partial blockages of blood vessels supplying the brain and who experience dizzy spells are at above average risk of having a stroke. Researchers conducted a test to find out whether an operation to unclog blood vessels in these patients would reduce subsequent strokes.

They rightly compared all the patients allocated to have the operation, irrespective of whether they survived the surgery, with all those allocated not to have it. If they had recorded the frequency of strokes only among patients who survived the immediate effects of the operation, they would have missed the important fact that the surgery itself can cause stroke and death and, other things being equal, the surviving patients in this group will have fewer strokes. That would have been an unfair test of the effects of the operation, the risks of which need to be factored into the assessment.

The outcomes of surgery and medical treatment shown in the figure are actually equal. However, if the two people allocated to surgery die before operation and are then excluded from consideration, the comparison of the two groups will be biased. It will suggest that surgery appears to be better when it is not.