Random allocation for treatment comparisons can be used in various ways. For example, it can be used to compare different treatments given at different times in random order to the same patient – a so-called ‘randomized cross-over trial’.

Tailoring the results of research to individual patients in this way is clearly desirable if it can be done. But there are many circumstances in which such crossover studies are simply not possible. For example, different surgical operations cannot be compared in this way, nor can treatments for ‘one-off’, acute health problems, such as severe bleeding after a road crash. 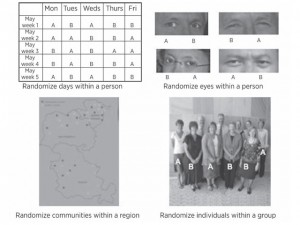 Random allocation can also be used to compare different treatments given to different parts of the same patient.

Another use of random allocation is to compare different treatments given to different populations or groups – say, all the people attending each of a number of primary care clinics or hospitals. These comparisons are known as ‘cluster (or group) randomized trials’.

For example, to assess the effects of the Mexican universal health insurance programme, researchers matched 74 pairs of healthcare catchment areas – clusters that collectively represented 118,000 households in seven states. Within each matched pair one was allocated at random to the insurance programme. [6]

However by far the most common use of random allocation is its use to decide which patient will receive which treatment.